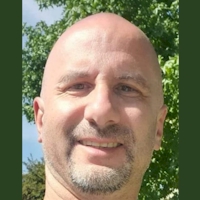 I met Pastor Rich in 2015 just out of prison. My wife and I were looking for a place to live and seen Rich had one to rent for those in recovery. Wwhen we first talked to him I couldn’t afford it so I passed, but my wife was persistent. A few weeks later we moved in. I had already gave my life to Jesus when I was on my way to prison for the 7th time but was only praying a bunch. Didn’t really know the Word. So when we moved in with Rich and his wife we started going to their church. They made us feel right at home from the very beginning. Rich drew me in with his preaching. Not only that,  we lived in same house so I was always asking questions. He has worked with many people with addiction and has more patience than I could ever have. He stays true to the Word and is always looking to share it with everyone. He became more than my landlord, he became my pastor. He became a good friend who opened my heart to Jesus and made me hungry for the Word. He made me want to better myself daily. I love him and his wife like family. This coming from a 21 time felon who spent almost 20 years in prison with a major drug addiction. Now coming up on 10 years clean and Rich was a major part of my change from the very beginning.