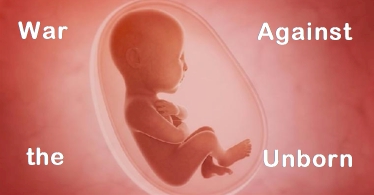 The War Against the Unborn in America

In the midst of the evil, wicked, Russian war against innocent Ukrainians lets lot forget about the evil wicked war against the innocent unborn here in America.

We are a nation under God that is massacring its unborn.

If there is not repentance, there will be a day when the Righteous God of the universe says ENOUGH!!!! He has every right to allow the America we know to be destroyed, rather from within or by outside forces.

The only way there is going to be repentance in this nation is by a powerful move of God upon this nation. It is not going to happen by legislation, as good as that is, and as much as it is needed. Laws do not change hearts, the Gospel changes hearts.

There needs to be a call to repentance and holiness from pulpits across this country. Revival starts from the pulpit. Enough of the milk toast messages. It is time for the meat of the Word. It is time for Christians to repent if we want to see the lost repent.

The massive slaughter of unborn babies will end when the sin of fornication is repented of, and the sin of self above human life. Sadly, there are many Christians guilty of both. The Holy Spirit gives followers of Christ the ability to walk in righteousness. There is absolutely no justification for Christians to live in a lifestyle of fornication and then going even further and aborting a conceived child. The Righteous God of the universe is not winking at the sin of fornication and abortion among pagans OR CHRISTIANS. Judgment is coming without repentance.

The War Against the Unborn